One more day of exams left and I am still baking up a storm. There were 60 scones in my kitchen today! There are only 3 people that live in my house, and no, I am not planning a party… They are actually for a fundraiser at my old primary school.

Surprisingly, my food has all gone to fairly good causes this week. And when I say “good cause”, I mean that it didn’t get eaten by only me, my mother and my brother. I baked “healthy” choc chip banana bread which I took to a fabulous games evening. I also shared these cookies with them. 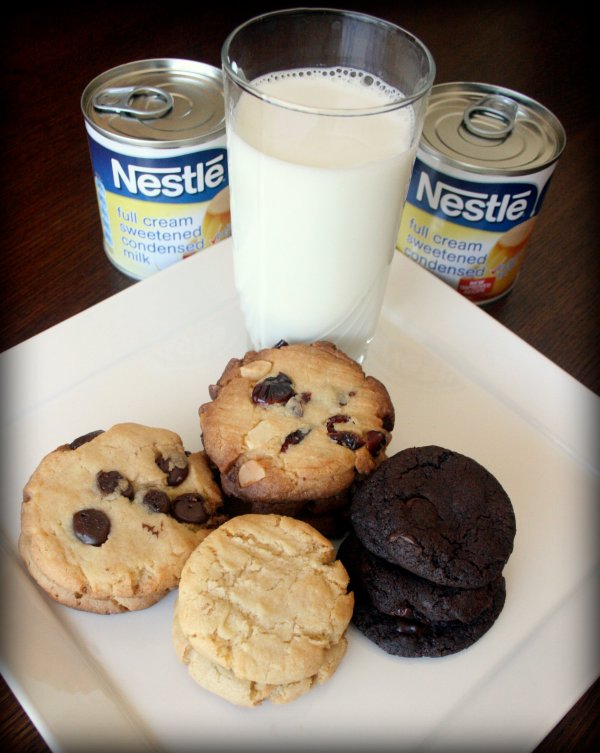 Condensed milk is one of my guilty pleasures. We hardly ever have any in the house unless we actually have a recipe that requires it, and generally then the recipe will require all of it (though we don’t scrape the tin out into the recipe, we reserve that for teaspoons of sneaky deliciousness). These biscuits are incredibly delicious as they are, but they also serve as a great base for other biscuits, such as chocolate chip, or macadamia and cranberry cookies. I also made some chocolatey choc chip cookies that were amazing, and they didn’t want to be left out of the photoshoot, so you can get a sneak peak at those as well.

These chocolate bad boys come from the recipe book I used for my bread. I had a hankering for chocolate cookies, so I went a bit wild and made all the cookies

Have you ever done the everything thing? I’m at the stage in my life where it is happening very often, and it makes sense: I have so many big choices to make, and everything seems to have culminated into this period of my life. Never have I been faced with so many options and life paths, and it’s getting almost overwhelming.

So I decided to bake of course.

These were originally meant to be “kitchen sink brownies” but as I realised how much these brownies were becoming a metaphor for my life at the moment, they became Everything Thing brownies.

Baking Everything Thing brownies to distract myself from life choices

I am finishing up my Bachelor’s degree in a few days (couldn’t be more excited for it to be over!) and I now have the potential of the big bad world ahead of me. Let me just warn you that University pretty much doesn’t really prepare you for real-world activities, only life can do that. I am scared that wherever I decide to go, I will end up having learnt all about the industry, but not enough about how to do a job in it. Well, these are just my concerns and fears for the future. And then there’s the fact that I don’t even know what I’m going to do with my life. 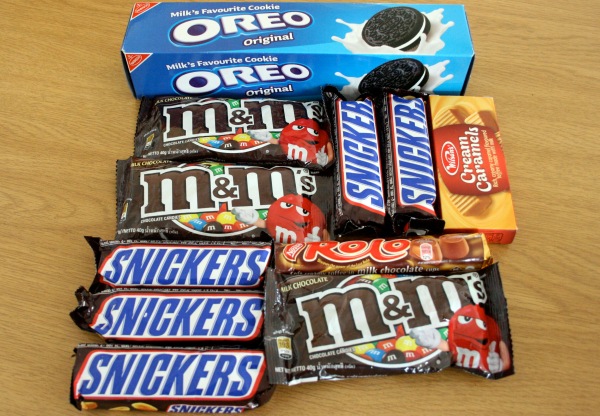 These are the contents, not the ingredients of Everything Thing Brownies. The Snickers were strong, bordering overpowering, and the Rolo’s disappeared. The Creme Caramels also disappeared, but that’s because I ate them before they made it into the brownies

I am going to London in two weeks time (looking forward to more travel pieces, yay!) and I am going to be spending time at a cool company there. I am meant to be returning to South Africa mid-January to start my honours degree back home in Johannesburg, which is cool because there’s not as much real life when you’re a student, however, yet another year of studies? It better be good. This obviously depends on whether or not I get accepted into my chosen University.

Looking back, though, I am heartsore to be leaving my current student life behind. I have recently met a huge number of wonderful people. I made biscuits for one of them with some cool new cookie cutters that I ordered online. I need some practice with them, but I am very pleased with my purchase. It’s going to suck leaving all these awesome people in this crazy little town.

“Hi Pam”! “Pam and Chris”. It’s easier to make cookies like this for someone else rather than admitting just how lonely the future could be…

As far as the taste of the brownies are concerned: matched my life as well. They seemed like a really good idea at the time, and I was accumulating the ingredients and building up to and enjoying the idea of these little gems. They looked like they would work out, everything was great on paper. When I finally got around to it, it was actually pretty disappointing. The Snickers kind of ruined them on the first bite, because of the intense peanut flavour and the way that the caramel went quite hard… Once I got over the initial surprise of the flavour though, things got better. So that’s where I am right now: initial bite was rough, but I know it can only get better. Especially if you make the most of the other cool things going on in there, like Oreos and M&M’s.

Everything Thing Brownies (ET Brownies) are officially a thing. Just incorporate everything that makes you happy, and your life will match up eventually ❤

Dining Hall dinners can’t be all that bad… Can they?

Dining hall dinners are the biggest challenge for the fussy eaters in Res. You can have chicken, or something whose name you don’t recognise… And more often than not, people will order anything, and just grab slices of bread to make a sandwich, or they will organise something in their room, like microwave pasta, 2 minute noodles, or take-aways. At least the lunches aren’t quite this bad.

This is a collection of most of the dinners I experience on our two week meal cycle. 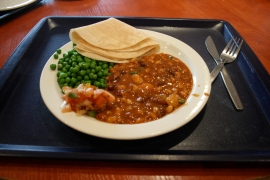 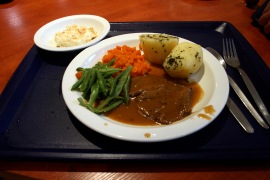 Wednesday: One of the good ones: Grilled sirloin with cheesecake (some of the best we could know) 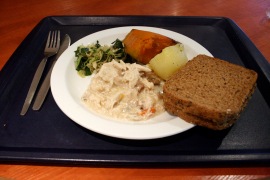 Saturday: Chicken schnitzel. One of those meals that reminds me of home. Generally the rice is also done quite nicely as well

Sunday: tuna wraps with tomato and mozzarella cheese. This one is quite delicious if you like tuna

Monday: chicken stirfry (looks just like the grilled chicken strips, but ok) with a wrap and an apple crumble-type dessert

Tuesday: chicken curry. This was definitely on a bad day, not the most appetising piece of chicken I’ve seen

Wednesday: Sweet potatoes with grilled soya sausages (yes vegetarian option). It comes with chocolate mousse. This one is a good one, especially because you score some cheese with those protein-packed viennas 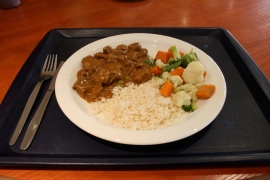 Saturday: Cape Malay style mutton curry. This can be a good meal, but one can be put off sometimes by the fatty or gristly bits that occasionally put a dampener on the meal 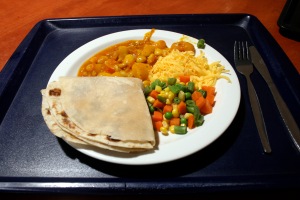 I suppose when I look at it like this it really isn’t that bad… But the lunches are definitely better. I also feel that they really skimp on the vegetables. When I ask for lots of vegetables, I get a normal sized serving. When I ask for less rice, or a small amount of rice, they halve it, and I still end up getting served more than I would if I had dished it up myself. I only have a few more weeks in this town, not many more dinner cycles left. I will enjoy my last days here! The food isn’t bad enough to change that.

Also be warned that I need to review just about every restaurant in this town before that time is up, so much delicious content is on its way.

Travels are over and now I have had to return to my studies, away from home as well, so it’s almost like I am travelling.

Student life in Grahamstown is really vibrant, and as small as this frontier town is, there is always something to do. For the next month or so, my posts will be focusing more on the Student Life in and around Grahamstown, the stereotypical exploits of 18-25-year-olds (or thereabouts), and the many ways that I get myself involved in the community. 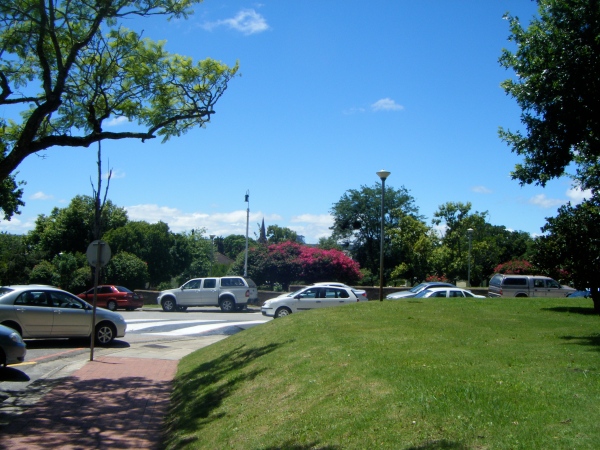 I will post photographs of Grahamstown in the hope that you can experience some of its beauty captured, so you can see the views I experience every day as I walk to and from lectures, practicals, tutorials, and sports.

Occasionally I may post some news to the site, but we’ll see how it goes, I’m more likely to post links to the Rhodes University newspaper Activate’s (turning 65-years-old this year) website where most of my stories will be featured.

All this as I bide my time until 2 April. The East awaits me…