There is this incredible little pastry shop in the middle of Paris – quite possibly the middle of the map (though of course this depends on where you place your map)… And it is right opposite the entrance which goes down a stone spiral staircase that opens up onto thousands upon thousands of human remains. You know, location location location. (The bakery was really lovely though, don’t get me wrong!) 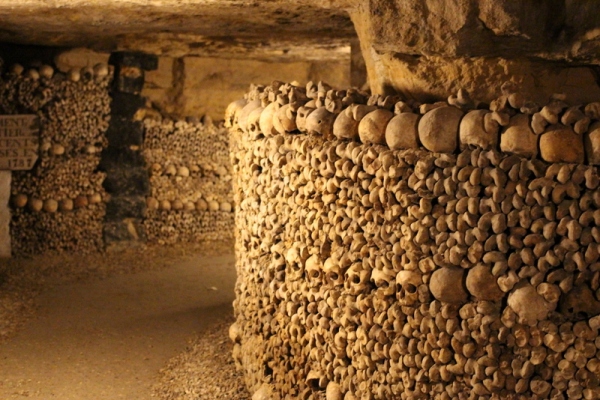 Les Catacombes, the Catacombs of Paris, France, are home to what seems to be an infinite number of old human remains that were dug up a couple decades ago from churchyards around the city, and placed, according to custom and set rules and regulation (because they have rules for how you stack bones, naturally), in the old underground quarries from even longer prior to that. People are weird. Maybe we were weird for being so intrigued and enthralled and captivated by it?

This place is immensely creepy. Thankfully, I, unlike my crazy travel partner, had not watched “As Above, So Below” before going into the twisting, dark, dank tunnels, so I had no fear of imminent supernatural about to attack, but that didn’t make it any less freaky. 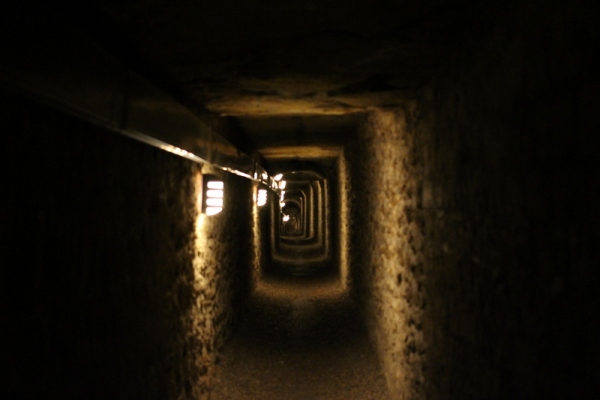 But enough of those childish descriptions. The information down there was great: I had no idea there were underground quarries below the densely populated city of Paris, and I got to learn a heck of a lot about the methods behind it. Also, how crazy miners are, and the people who don’t think things through, resulting in some ceilings of the tunnels collapsing. How do you not see that coming? Have you never built a sandcastle on the beach before (or in any sand whatsoever)? Silly…

What was not silly, was the fact that there was information in ENGLISH as well, for a change. It was a really nice relief to actually know what was going on down there. Except for the creepy Latin inscriptions as you head into the tunnels which house the actual skeletons – which makes it even eerier (grown up words!).

Typically people don’t appreciate or respect others, or the dead, and they go and vandalise history… Spooky though

It was really something nice and different to do in Paris. They are open until fairly late, the place is extremely accessible, and we even got a student discount, which is always great! The only problem (apart from having to do even more stairs) was that you come out somewhere quite different to where you go in, and we forgot to familiarise ourselves with the route back. It was fine, we were in Paris! Stunning little sight-see, not too busy, absolutely worth the visit!